Wheaton Precious Metals is a mining and silver streaming corporation based in Canada. Since the company is publicly traded, you can buy shares for your portfolio. Mining companies are a good investment if you want to invest in the precious metals industry while still earning dividends. But is Wheaton the best one to use?

Let's take a closer look at Wheaton Precious Metals and what it offers.

Wheaton Precious Metals is a mining company that also does silver streaming. It focuses chiefly on silver, rather than mining gold or other precious metals like some of the competition. While the company is based in Canada, it has expanded to cover mining operations in a variety of countries.

Wheaton Precious Metals was first called Silver Wheaton. However, the company's name changed in 2017. In 2016, the company managed to produce over 30 million silver ounces alongside 350,000 gold ounces. That same year, they had net earnings of almost $200 million.

One article from 2017 has put together a variety of reasons why the author believes that Wheaton Precious Metals is a good stock to invest in. Let's take a look at some of what they had to say. Keep in mind that the economic climate has changed significantly over the last 5 years, so their initial observations might not be relevant anymore.

In 2017, Wheaton Precious Metals was an ideal stock because of the company's operating margin. Between 2005 and 2017, shares more than quintipled in value. And the company's value was expected to continue increasing as they expanded their operations. 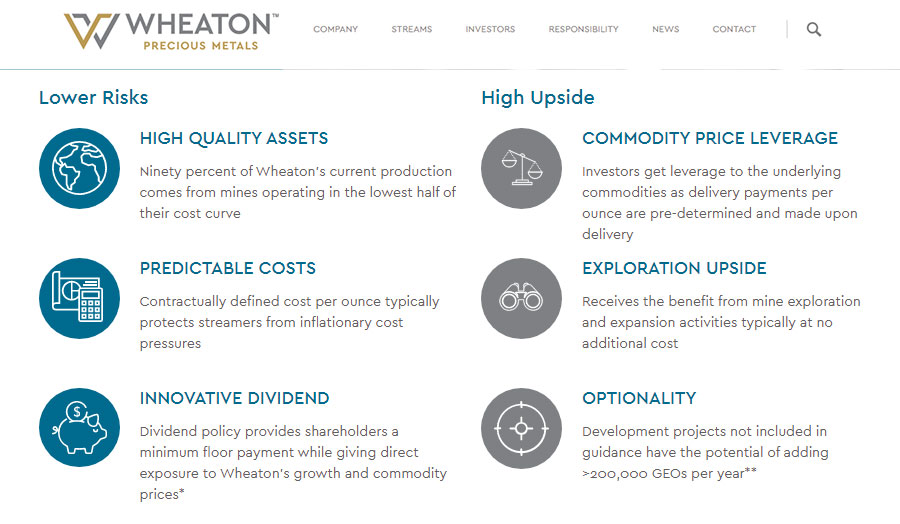 One of the biggest advantages of Wheaton Precious Metals is that it is not set up like an individual mining corporation. Instead, the company works with partners to create extremely high profit margins. Because they don't have the same investment in silver mining operations, they also don't have the same staggering operating costs.

The basic principle is this: Another company wants to develop a mine or expand one of their own mines, but they don't have enough money. Wheaton Precious Metals gives this company the money for the mining operation, but they get a percentage of the mined ore in return. The contracts often last for the entire life of the mine, or for several years at least.

This allows Wheaton Precious Metals to gain a constant stream of silver without worrying about operating costs. After they provide the lump sum up front, the other company is in charge of managing the operation. It allows Wheaton to make back their investment quickly and without draining their budget.

Obviously there are some daily costs involved in the upkeep of the company. But there aren't costs for the day to day mining operations. Since Wheaton Precious Metals works with other silver companies, they don't actually need to deal with the logistics of operating a mine.

This protects them from a great deal of risk as well. If something goes wrong with the mining project, the other company is liable. The only major risk for Wheaton is that the project won't yield enough silver to cover their expenses. However, as long as the company does enough research and due diligence, the chances of this are unlikely.

Overall, the overhead costs of operation are much lower with Wheaton Precious Metals than with a traditional mining company. Once they pay the lump sum to develop the project, they're done. There aren't any unforeseen circumstances or consequences to worry about.

Wheaton Precious Metals has struck deals with a great number of mining companies all over the world. Since they have multiple royalty deals regarding multiple projects, there's less liability if something goes wrong with one project. The other revenue streams are able to cover the loss.

One of the biggest hesitations that investors cite regarding Wheaton Precious Metals is the fact that they only mine silver. Silver is much less lucrative than gold, even if it is a sought-after precious metal. Some people prefer to work with companies that focus on a combination of silver and gold.

But the lack of diversification might actually work in the company's favor. When they seem to be falling behind in terms of their financial production, they can pick up the slack with gold. They did so in 2016 and 2017. By striking deals to process gold as well as silver, they were able to close the gap in their revenue.

This means that Wheaton is able to tap into the gold market in order to cover places that the silver market won't. It adds another level of stability to the company's income, and it speaks well to the management team running the show.

Gold and silver are precious metals that have a good outlook for the long term. This was true in 2017, and it remains true in 2022. The prices of gold and silver have gone through some hectic changes during the COVID-19 pandemic, but they appear to be settling down now.

Gold and silver have been prioritized as investments for thousands of years. In the past, investors have recommended putting some of your assets into precious metals. During the 2008 financial crisis, demand for precious metals skyrocketed. It has yet to fade, largely because of how these assets help protect against economic insecurity.

That was just proven during the COVID-19 pandemic. When the stock market was in shambles, the prices of precious metals rose sharply. Many people looked into precious metals investment for the first time because of the economic turbulence. In the future, gold and silver are expected to grow in value. Demand is also expected to rise. 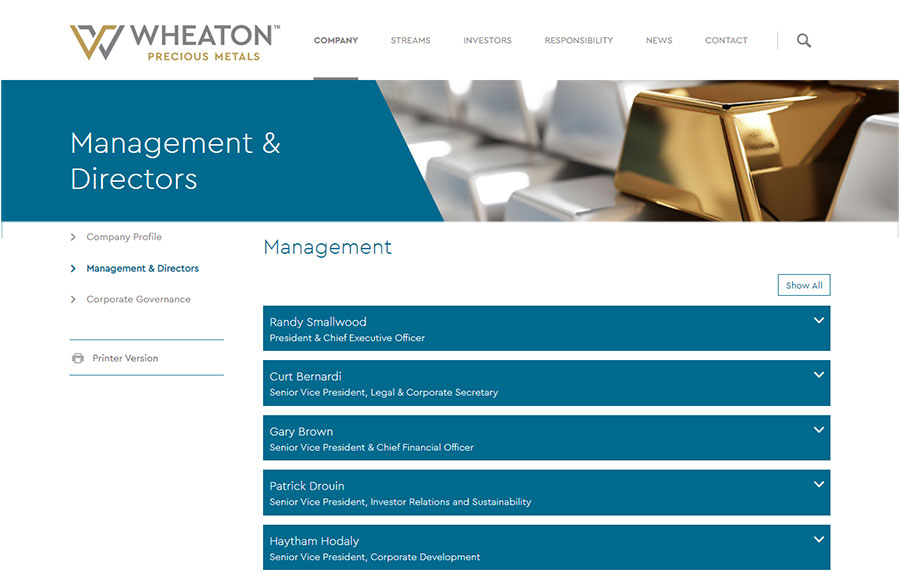 All of the decisions made at Wheaton Precious Metals indicate a management team that knows what it's doing.

They have a business model that works and creates high profit margins, the ability to operate on multiple continents, and the ability to net millions of dollars in profit every year. Not only that, but they've managed to pick up the slack in silver production by acquiring gold mines when needed.

The management at Wheaton Precious Metals has been involved with the company for long periods of time. They also all have a strong background to begin with.

The CEO of the company has been with the company since it was first founded. He joined the board of executives in 2007. Then he took over as CEO a few years later. Today, he's been the CEO for more than a decade, and he's brought Wheaton Precious Metals through multiple new ventures.

All three of these men have decades of experience working with precious metals and finance. And they've spent almost 15 years working together to balance the future of Wheaton Precious Metals. It seems clear that they work well as a team, considering how successful the company has been thus far.

One of the advantages of gold and silver is that these assets are tangible. They also tend to be more stable than the stock market. However, they also don't pay you dividends, which means you won't earn extra money for owning them. In addition, you may have to pay different storage costs.

That's why some people turn toward precious metals stocks instead. That way, you can have a stake in the precious metals industry, but you'll still earn a share of the profits. These companies do tend to perform well when the stock market is volatile, so they can be considered a kind of hedge.

When you invest in the company, you can look over their financial data and determine the potential for future growth. You'll also be able to stay apprised of the management's plans for the future. Each quarter, you'll receive dividend payments from the profits of the company. You might also be involved in buyback initiatives, in which you might be offered more than your share price to sell back to the company.

The valuation of Wheaton Precious Metals is another factor that investors should take into account. In fact, the company might have greater valuation advantages than you think.

The biggest example is in the P/CF, or price to cash flow. The average in the precious metals industry for this tends to be about 12 at best. But Wheaton Precious Metals's P/CF is over 16. That's because it has operating margins that are much higher than those of traditional mining companies.

Even if the P/CF falls in the future, it is still likely to remain higher than the industry average. That's thanks to the special advantages that come with Wheaton's setup and lack of overall operating costs.

Is Wheaton Precious Metals a Scam?

Wheaton Precious Metals is not a scam. The company has been around since 2004 and has been publicly traded for well over a decade. They were established after Goldcorp sold enough of its operating shares to allow the company to be traded publicly. In 2008, Goldcorp released them entirely.

Since the mid-2000s, Wheaton Precious Metals has just continued to grow. It has expanded its mining and streaming operations, forming partnerships with a variety of silver miners. In addition, it has acquired companies like Silverstone Resources. It is traded on the Toronto, New York, and London Stock Exchanges.

The question is whether buying Wheaton Precious Metals stock is worth the investment. The company has been successful for multiple years on end. In addition, they seem poised to continue growing. They appear to be well-managed and to have multiple projects in the works. In addition, since they operate in multiple countries, they're less likely to be threatened by one bad run of luck in one project.

But is it better to invest with Wheaton than with other mining companies? That's hard to say. You might want to invest with Wheaton if you see the potential for growth in their silver streaming. They're also worth the investment if you're specifically looking for a company that specializes in silver instead of gold, platinum, or copper.

Wheaton Precious Metals is a silver mining company that has undergone enormous growth over the past decade. Their shares have quintupled in size since 2005. They are listed on all three major stock exchanges in London, Toronto, and New York. Their operations span multiple countries and continents, as well as partnerships with several major silver mining companies.

All in all, they do seem like a solid company to invest with. They perform well and have good business management. There's further potential for growth in the industry, and they specialize in an area that has very little major competition.

With that said, there are some risks. First, the best time to invest with Wheaton Precious Metals would have been fifteen years ago. There's no guarantee that the share price will quintuple again. You don't want to buy into a company at the peak of their value, since then the only place to go is down.

You'll also want to consider the risks of investing in stocks in general. With the precious metals industry, many people prefer to buy precious metals themselves because the assets are more stable. Stocks are subject to market volatility, even though precious metals companies tend to do well during times of instability.

So if you want a secure investment, it's better to buy precious metals themselves. But if you want a stake in a mining company that will pay you dividends, Wheaton Precious Metals does seem to be a solid choice.