Fortress Gold Group had been operating since 1995, making it one of the longer-lived players in the precious metals industry. Plenty of other dealers are products of the technology age. In 2007, the company transitioned into being a privately owned corporation.

While the company was in business, their stated goal was to help people invest in precious metals. In addition to investing for a personal portfolio, people could set up a precious metals IRA. These specialized retirement accounts have tax deferral benefits.

However, it seems like they haven't been accepting new clients since 2018. Their website explained that the company wouldn't take on new customers, but that old customers could email the support team. Several people have said that they tried to use the support email, but they never heard anything back. They also tried to get in contact by phone and didn't hear anything.

The website has since become totally defunct. The security registration expired, and now it doesn't seem to be up at all anymore. The company's Better Business Bureau page is still open because they've never officially closed. But there's absolutely no way to get in contact.

We know that there's no way to get in contact, because one former customer said that both he and his lawyer attempted. There was never any response. The company also hasn't responded to a complaint filed on their BBB page in 2019.

It seems clear that Fortress Gold Group is no longer interested in selling precious metals. Not only that, but they seem to have no interest in explaining what happened to their past customers. And they've made no attempt at helping clients with the transition to a new precious metals dealer.

When the company was in business, they offered a variety of precious metals. You could purchase products like gold, silver, platinum, and palladium. They also had IRA services. You would work with one of their custodial partners to set up an account, and then you'd purchase their precious metals to fund it.

Not all precious metals can be held in a retirement account. They need to meet specific IRS requirements. Fortress Gold Group stocked these kinds of bars and coins. They also helped to explain the requirements to customers who were confused.

This is far from the only company with self-directed IRA services. There are plenty that have a much better reputation. Basically, those companies are unlikely to suddenly disappear after being accused of stealing a customer's money.

Fortress Gold Group didn't share their pricing online when they were in operation. You had to call to get a quote over the phone. While this is fairly common with online gold deals, it isn't necessary. Many websites use an algorithm to adjust the price of gold based on the market.

By not posting their official prices, Fortress Gold Group didn't have a certain level of transparency. There would be no guarantee that you were getting a fair quote, or even the same quote that the last caller had been given. Oftentimes, it causes a lot less headache to simply look for a company that has their pricing structure published on their website. 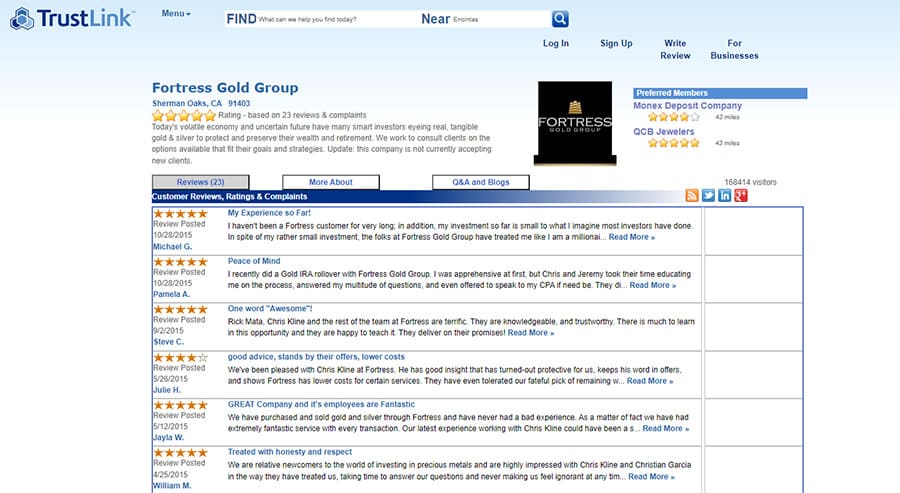 Trustlink shows quite a few positive reviews of the company. It seems that when they were in business, most customers were extremely happy. Fortress Gold Group has 4.9 out of 5 stars, indicating that basically everyone was pleased with the service.

However, Trustlink's most recent review came from 2015. So it seems like there's nothing to indicate good service past that time period.

One of the reviews came from someone who said they didn't have a lot of money to invest at first. Unlike companies with a huge minimum purchase threshold, Fortress Gold Group was courteous and helpful. They treated the customer respectfully, answered their questions, and really seemed to care.

There was another customer who said that they used Fortress Gold Group's services to facilitate an IRA rollover. While we aren't sure how in depth the IRA services were, several reviews do mention them. It seems that Fortress Gold did specialize to some degree.

The Trustlink reviews about the IRA services are also all positive. People said the process was clear, streamlined, and super easy to do.

Is Fortress Gold Group a Scam?

When the company was active, it had excellent reviews. There was glowing praise from customers for how simple and convenient the IRA services were. People particularly praised the customer service team for being friendly, educational, and efficient.

Fortress Gold Group definitely gave these people the services it claimed to. So what happened to the company?

Most likely, the owner simply decided he didn't want to run it anymore. Or the owner ran out of money to continue the operation. The company doesn't seem to have filed the paperwork to dissolve or declare bankruptcy, so it still exists. But there's no way to get in contact.

The Better Business Bureau no longer gives this company an accreditation. In addition, they give them only a B- rating. The reason is listed as a failure to respond to a complaint that was filed.

There is only one official complaint that's been filed within the last three years. The person said it was related to an issue with a product or service.

The person said that they needed information about one of their accounts. Fortress Gold Group was the only company with that information, or so it appears from the complaint. Not only had the person tried to reach out, but they'd also had their attorney reach out. No one had ever responded.

This is especially troubling because Fortress Gold Group gave past customers an email to use to get in contact. It seems like they never bothered to check it or follow up on the queries. And there was no other way for the customer or their attorney to find the company.

It sounds like this complaint was not related to any kind of dispute or scam. The customer just wanted information. But that complaint was posted in early November of 2019, and there still hasn't been any acknowledgement or response from the business.

There is one recent customer review on the BBB website, which gives the company 1 out of 5 stars. It was left in November of 2021.

The reviewer said that her husband placed almost 40,000 dollars in an account. He purchased about 10,000 dollars worth of coins. The other 30,000 dollars were supposed to be put in a different tax-advantaged account and used to pay storage and maintenance fees.

According to the reviewer, all 30,000 dollars were drained within six years. The value of the purchased coins also dropped. The customer never got an answer for why his personal account had been drained of its funds. Both he and his wife tried to call the company representative and were completely unable to get a response.

The couple waited until the husband reached retirement age to avoid incurring any penalties. Then they contacted their custodian, Equity Institutional. They asked to withdraw their coins so they could store them elsewhere. But the coins were never delivered. According to Equity Institutional, the package had shipped out and been successfully delivered.

The reviewer concluded by saying that they'd lost 40,000 dollars for no reason. She also said that if she'd erred in the statement, there was no way to tell, because Fortress Gold wouldn't get in contact.

That's a pretty big deal! Fortress Gold Group should definitely answer for whatever happened to the account. It's enough to make us wonder if maybe that was part of the reason that they suddenly went underground.

Fortress Gold Group is a very odd company. It seems like they have been unreachable for several years now, but they've never filed the paperwork to go out of business. Multiple customers have noted that they aren't getting responses to their emails. It's very difficult to get a hold of the upper management.

For those who were interested in investing with Fortress Gold Group, we recommend looking into a different IRA company. Unfortunately, despite largely positive customer feedback in their heyday, Fortress Gold appears to be defunct.