Are you interested in investing in precious metals? Did you know that there are more ways to do it than by buying gold and silver? If you want to be part of the precious metals industry, you might consider buying stock in a mining company or refinery.

Yamana Gold is a publicly traded mining corporation. But is it worth purchasing stocks? What kind of dividends does the company pay? Is there room for growth? And perhaps more importantly, are their practices actually legitimate?

Yamana Gold is a mining corporation that was founded in Canada in 1994. It went public the following year, beginning to be traded on the Toronto Stock Exchange. The company grew over time and was listed on the New York exchange in 2007, and then on the London exchange during 2020. People from all over the world are able to buy into the company's stock and become stakeholders.

The merge onto the New York exchange was a big deal. It allowed the company to expand to an entirely new pool of investors, which pushed the price much higher. Something similar happened when it was listed on the London exchange. Those markets allowed for an enormous opportunity for growth.

If you invest now, you might have missed that surge in growth. But there may be opportunities to see growth in the future. Many of the shareholders don't hold onto their stakes for the price so much as for the dividends. Everyone shares the profits of the company, which are often substantial due to the amount of precious metals that they mine.

In 2003, prior to being listed on the New York or London exchanges, Yamana Gold merged with another company. This massive merger made the corporation one of the largest on the planet. It allowed Yamana to own gold mines. From there, the company garnered enough capital to create its massive Chapada mine.

As the years went on, Yamana Gold continued to acquire companies. They merged with seven other precious metals mining outfits in total. These merges allowed them access to more capital, wider networks, more mines, and more developmental projects. They also acquired all of the contract stakes that the subsidiaries had with other miners.

They have essentially created a monopoly of many of the mining outfits that were previously traded on the Toronto Stock Exchange. This makes them an absolutely massive corporation with a lot of power and a lot to gain.

But since they're such a large corporation, they might not have as much room to grow. The days of massive merging and expansion may be behind the company. It's possible that they will continue to acquire other mining operations, but right now they're too large for any of those acquisitions to have a giant impact on their stock price.

There was a period of time from 2009 through 2016 in which over 1,000,000 ounces of gold were produced every year. That's a massive amount of precious metals for a single company to mine, regardless of how many different operations the gold came from.

The company was at its largest peak in 2016. It was at this point that they created Brio Gold as a separate subsidiary. When Brio Gold branched off of Yamana, it took with it several Brazil-based mines and a few other assets. This allowed Yamana to focus its attention more on its other mines.

There was some irritation among the shareholders due to the large corporate executive payouts that the upper management received. These massive payouts reduced the dividends that the shareholders themselves earned. As a way of securing the stock price, the company replaced its CEO with current CEO Daniel Racine.

Another part of this restructuring involved selling two mines. This allowed the company to pay off its debts. That way, the shareholders wouldn't be on the hook for the company's liabilities. Otherwise, the liabilities might have come out of their share prices. 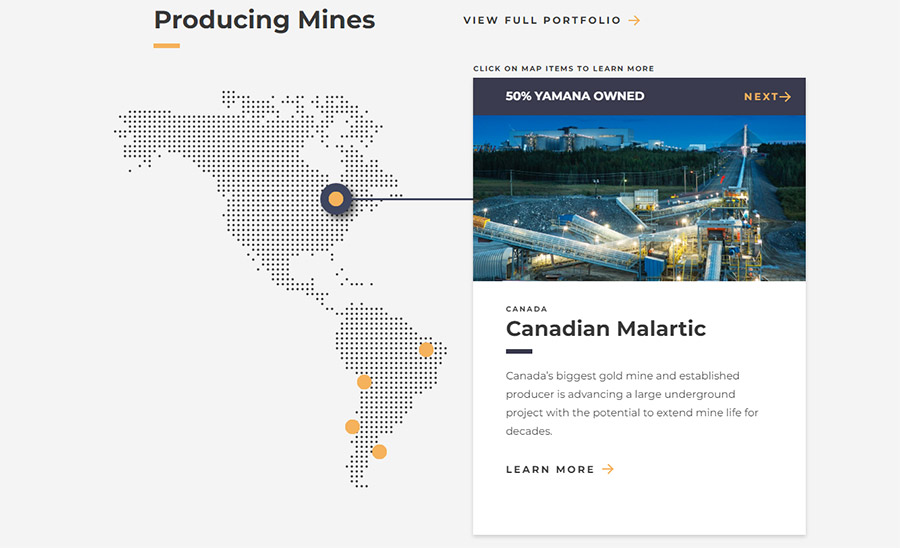 The company has been behind the development of multiple mining projects. In addition, they have acquired the mines of other companies, plus had stakes in the projects of some competitors. Not all of their projects are still active. Many naturally dried up, while others were sold or given away as part of dividing up subsidiaries.

One of the current mines is the Malartic, located in Canada. It was bought in 2014. Yamana Gold only owns 50% of the mined assets, while their partner company owns the other 50%. That's how they were able to purchase such a large mine without making their stock unstable.

The Malartic project involves both silver and gold.

Another mine is right near Chile's Atacama Desert. This is one of the most special because it is one of the largest gold mines on the planet. Rather than purchasing this one for themselves, Yamana Gold simply acquired it during their merger with the company Meridian Gold.

This is chiefly a gold mine. The miners look for veins of gold underground.

Another Chile mine is the Minera Florida project. This was another project that became part of Yamana's holdings when they merged with Meridian Gold. There are veins of zinc, silver, and gold.

One mine is called the Jacobina mine. This Brazil-based mine was part of the Desert Sun Mining company. Yamana Gold acquired Desert Sun Mining and all of its assets. The main ore that is mined is gold, which is extracted through underground work.

There is one more mine that is currently in operation. This is an Argentina-based mine called Cerro Moro. Like several of the previous mines, it belonged to another company first. Yamana Gold merged with a company called Extorre Gold Mines Limited and acquired its mining stakes.

But the Cerro Moro mine actually wasn't ready to operate for several years following the merger. It took six years before the company finally began extracting ore in 2018. The mine is full of silver and gold.

There were also many prior operations. Sometimes the company sold these operations, or the operations ended because the majority of the ore had been extracted. Every mine has a projected lifespan. For some projects, that lifespan is only a few years before the mine is shut down.

Is Yamana Gold a Scam?

Yamana Gold is not a scam. It is a publicly traded corporation with a long history in the mining business. Unlike companies that use just one or two mines, Yamana has developed many projects across multiple countries. This makes it a more stable investment than many more volatile mining projects.

As mining corporations go, Yamana is a relatively solid one to invest in. It has been around since 1994, has multiple current operations, and is working on expanding in the future. The company seems to be run by people who have a solid understanding of how to manage and expand a business of this size.

If you're thinking about investing in mining corporations, Yamana Gold is a pretty safe bet. This company has an enormous number of projects, with active mines in multiple countries all over the globe. Shares of the company are publicly traded, so you can purchase a piece to earn the dividends from the profits.

There are some advantages that Yamana has over other mining outfits. For example, since the company has several mines in operation, it is less likely to be stymied by a single setback. It has also been around for almost 30 years and has expanded widely in that time. The key corporate executives seem to have a good handle on what they're doing.

But you should only invest in this company if you're specifically looking for stocks. Rather than purchasing some of the precious metals they mine, you'll be owning a small stake in the company itself. This has advantages over precious metals because you'll earn dividends. But it has disadvantages, too.

Stock holdings are much more subject to volatility than precious metals. They can be affected by global economic factors and human decisions far beyond the basic price of gold. Any one corporate misstep or environmental catastrophe could be terrible for the shareholders. There's no guarantee that your holdings will remain as valuable as when you make your purchase.

It is important to have a mix of traditional assets like stocks alongside precious metals holdings. That's how you'll grow your portfolio. So it's just a matter of whether you believe buying stock in this company is in your best financial interests.

If you want to purchase precious metals themselves, this is not the company for you. You won't be able to buy gold or silver from Yamana. Instead, you should work with a precious metals dealer.