When you're looking to invest in the precious metals industry, there are a lot of options available to you. In addition to buying gold and silver, you can purchase stock in a precious metals company. There are dealerships, refineries, and mining corporations.

Kinross Gold is a large mining corporation based in Canada. But is their stock worth buying? Most importantly, do they actually have legitimate practices?

Kinross Gold is a mining corporation that was founded in 1993. Today, it trades on the New York and Toronto stock exchanges. There are seven active mines spread across Africa, South America, North America, and Russia.

Kinross started when three different corporations were meshed together. By combining these properties, a new corporation was created that owned royalties and a stake in two different mines. The company was first listed in June of 1993 on the Toronto Stock Exchange. The following year, it expanded to the New York Stock Exchange.

The company's first project involved a gold mine in Alaska. Though the mine had been prospected for decades, it wasn't actually in operation until 1996. That mine is still in operation, though it is controlled by the Fairbanks Gold Mining subsidiary.

Another subsidiary of the company merged with a company called Amax Gold in 1998. This created Kinam Gold, which is the largest subsidiary controlled by Kinross Gold.

In 1999, Kinross purchased Hollinger Mines during the bankruptcy proceedings of the Royal Oak Mines company. But in 2006, they sold that mine to Goldcorp. They also purchased the LA Teko Resources company in 1999.

In 2002, Kinross worked with a company called Placer Dome to create a joint venture in the Porcupine mine. Then there was a merger between Kinross and two other major companies in 2003. When 2006 rolled around, Kinross purchased Crown Resources Corporation. This gave them Buckhorn Mountain and all of its mineral processing plants.

In 2007, Kinross underwent a major trade with Goldcorp. As part of the trade, it received full control of the La Coipa mine along with $200 million in liquid cash. In exchange, it gave up its place in the Porcupine venture and about 32% of its stake in the Musselwhite operation.

Almost all of Red Back Mining was bought by Kinross in 2010. This is when Kinross acquired its two African gold mines. The same year, Kinross acquired several more properties and mineral deposits. They sold some of their interest in varying projects to competitors like Barrick Gold.

In 2011, Kinross became part of a share purchase agreement that would allow it to keep all of the exploration licenses for the Kupol mine. Then in 2012, Kinross sold its stake in another mine, the Crixas.

In 2017, Kinross secured mineral rights to a portion of land beside the Fort Knox mine. This portion of land is estimated to have about 2.1 million gold ounces inside. In 2021, Kinross planned to acquire the Great Bear Resources company so that it could control a new mining operation in Ontario.

Unlike many companies that have multiple joint ventures, Kinross Gold owns a 100% stake in nearly all of their mines. The only mine in which they have a 90% stake is in Ghana, where the other 10% stake is part of the Ghana government.

The Fort Knox mine in Alaska has been one of the company's biggest assets. It has been part of the company since its inception and has yet to run out of gold. There were initial estimates that the gold mine might run dry in 2021. But after an expansion was announced in 2018, that estimate was updated to 2027.

The expansion increased the life of the gold mine by around 1.5 million ounces. In addition to the mine itself, the property also includes a heap leach facility, mill, and tailings storage.

The Round Mountain mine is a project that has been operating out of Nevada since 2003. Originally, Kinross Gold had just a 50% stake in the mine. However, it purchased the other 50% in 2016. There was an expansion project taking place in 2011, and the mine produced nearly 200,000 ounces of gold in 2015.

Kinross announced that it would be expanding Round Mountain again in 2017. This new expansion is meant to extend the lifespan of the mine by about 1.5 million ounces of gold. Work should be able to continue for five years longer than originally planned, lasting through 2024.

Bald Mountain is another mine located in Nevada. Rather than being operated by Kinross itself, it is controlled by the KG Mining subsidiary. Bald Mountain was subject to a major operating loss during 2016. But it does have over 2 million ounces of gold in its reserves.

The Paracatu mine is located in Brazil. In addition to the mine itself, there are also two tailings storage places and two processing plants. Kinross acquired about half of the mine in 2003, and then it bought the remaining half the following year.

The Paracatu mine is the biggest employer in this particular region of Brazil. It produced over 470,000 ounces of gold in 2015.

The Tasiast mine is located in Mauritania. It has been subject to some controversies, including a class action lawsuit that was later settled. The company that originally owned it was called Red Back Mining. Kinross Gold purchased Tasiast from Red Back in 2010.

This mine has a recovery plant, carbon leach operations, and an open pit structure. It produced over 200,000 ounces of gold in 2015. But in 2016, the mine suffered a major operating loss, in part because it had to close down due to issues with the local government and work permits.

The Chirano Mine is located in Ghana. It is the only mine that Kinross doesn't own fully, since the government has a 10% stake. In 2011, this mine produced almost 250,000 ounces of gold. It has a very complex infrastructure that includes two underground setups and three open pits. In 2016, this mine had a major operating loss.

The Kupol and Dvoinoye mines are located very close to each other in Russia. Combined, these are the two most profitable projects for Kinross. They earned nearly $350 million combined in 2016, a year when many other Kinross ventures were facing market losses.

Kinross acquired the Dvoinoye mine in 2010 and began operating it in 2013. Materials from this mine are transported to Kupol to be processed. In 2016, both mines produced nearly 750,000 ounces of gold. 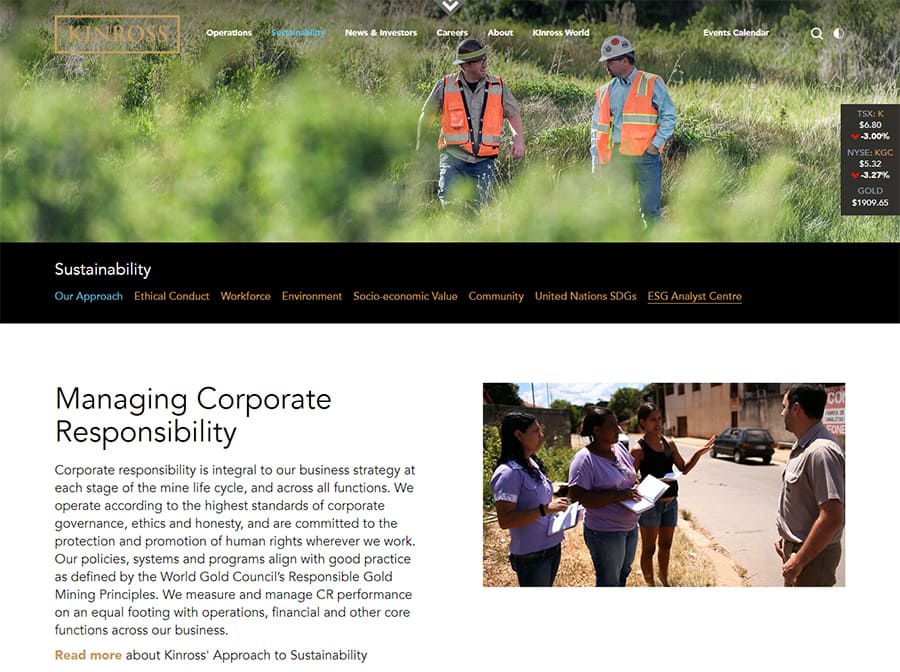 Corporate responsibility is a big concern of shareholders, especially when it comes to natural resources corporations. Kinross was given an A- rank by the Maclean magazine in 2015 in terms of corporate responsibility. While not a perfect ranking, it was the highest rank given to any mining company in Canada.

Maclean also recognized Kinross Gold as one of the most responsible companies in Canada in 2009. There were several reasons for this. One was that the company had cooperated with environmentalist concerns in Washington state. At the time, five of eight mining operations complied with international guidelines for cyanide management.

By 2013, eight of nine mining operations complied with these guidelines. In 2010, Kinross donated $1 million to the University of Guleph to further its Better Planet Project. In addition to this, Kinross used $100,000 to help fight against hunger.

Kinross made a commitment in 2010 that it would donate $10 million during three years to help Mauritania create a mining school. In 2011, Kinross also donated $2.5 million to create an emergency medical center in Mauritania.

From 2011 to 2013, Kinross was consistently placed in the Dow Jones Sustainability index. It was also placed in indexes for global companies committed to ethics, carbon management, and emissions management. It was also named as a top corporate citizen in Canada for four years running.

A ranking of 92 different natural resources companies found that Kinross had the 8th best track record on honoring the rights of indigenous peoples in the Arctic region.

Is Kinross Gold a Scam? 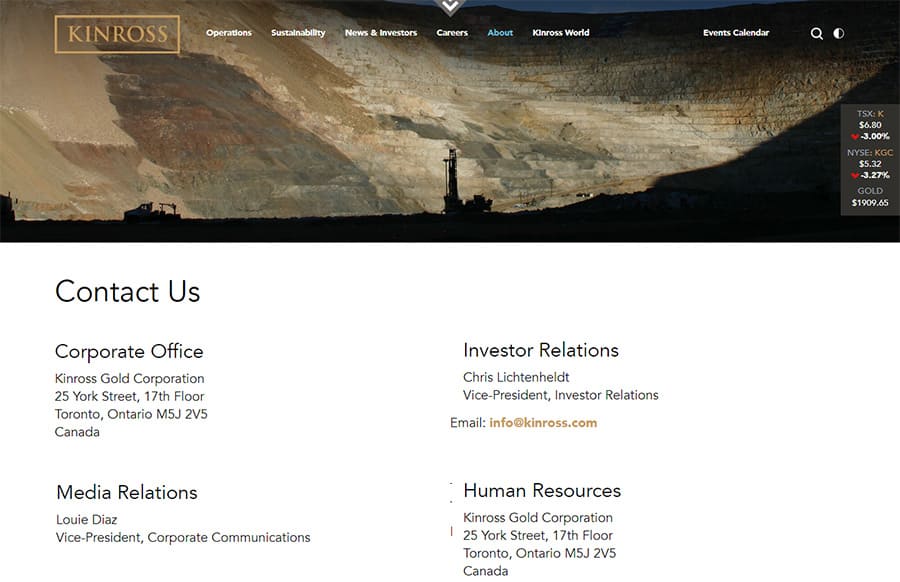 Kinross Gold is definitely not a scam. They are a legitimate mining company with legitimate headquarters. Since they are publicly traded, every aspect of their business and finances is analyzed for investors. You can find all of the information regarding their mining operations, projections, performance, and other things.

However, the company has run into some trouble with certain projects. Most notably is their Tasiast mine, which was subject to class action lawsuits. They have also had times when their financial performance did not line up with the expected projections, but that doesn't seem to be related to any malicious market manipulation. 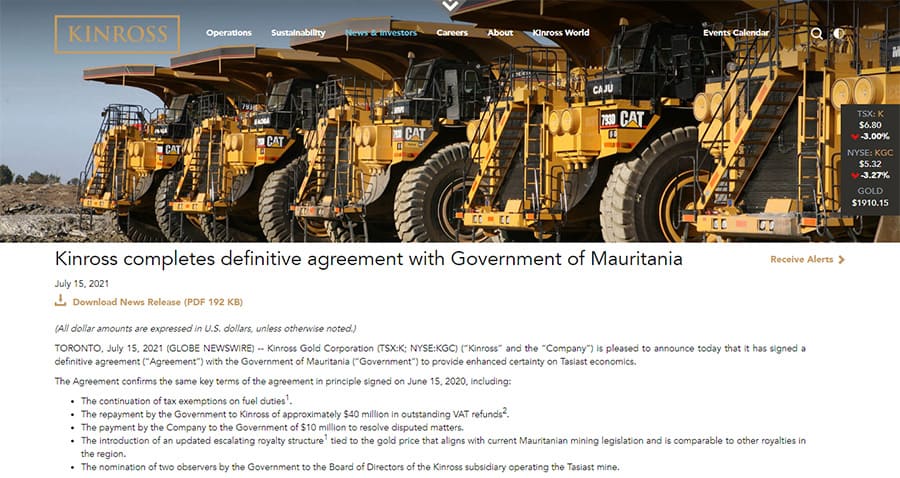 After Kinross Gold bought the Tasiast mine, it had impairment charges every single year for the next five years. These charges were recorded from 2011 through 2015. In 2016, the mine briefly needed to stop its operations because of an issue with the local government and work permits. But then it resumed later the same year.

The lawsuits were formed in 2012 by plaintiffs in both Canada and the US. They made allegations that the company had misstated how valuable the Tasiast mine was, along with other misstatements.

There were three main components of the lawsuits:

Litigation continued for several years. Eventually, in 2015, a $40 million settlement was reached. This settlement was paid out among all plaintiffs in the class action lawsuit.

Kinross Gold is among the largest mining companies in the world. It operates seven gold mines across multiple continents. Because of the number of mines, it is unlikely to be beset by issues related to one project being delayed or underperforming. There is also quite a bit of room to grow.

However, the company has not always performed in line with quarterly projections. That can cause the stock price to be more variable, and it means that shareholders might have less trust in the brand.

In addition, you can only buy stock in this company. You can't buy the actual precious metals that they mine. So if you're looking to invest in tangible assets like gold and silver, you'll be better off working with a dealership or refinery that actually sells these pieces.